I dreamed we didn't have enough to eat.  I awoke craving Sprite and vanilla milkshakes.

It was FREEZING when we got out of the tent.  All of us were hungry; I made us consume about 1000 calories of nuts and granola each before hitting the trail.  That was a mistake on two counts.  1) We became chilled while eating...we should have walked a mile or so to warm up before having breakfast.  2) It was too much food.  All of us were hungry when we woke up, but our stomachs had shrunk.  We needed to eat more snacks more often, not more food all at once.  We therefore hit the trail feeling sick and freezing.

A mile or so later, we were more comfortable.  The sun came out and we warmed...quickly.  Within ten minutes of walking in direct Sierra sunshine, we were hot.  That's one thing about the Sierra -- it's all about extremes.

Our route took us downhill...and to the most frightening part of the entire John Muir Trail, as far as I'm concerned. 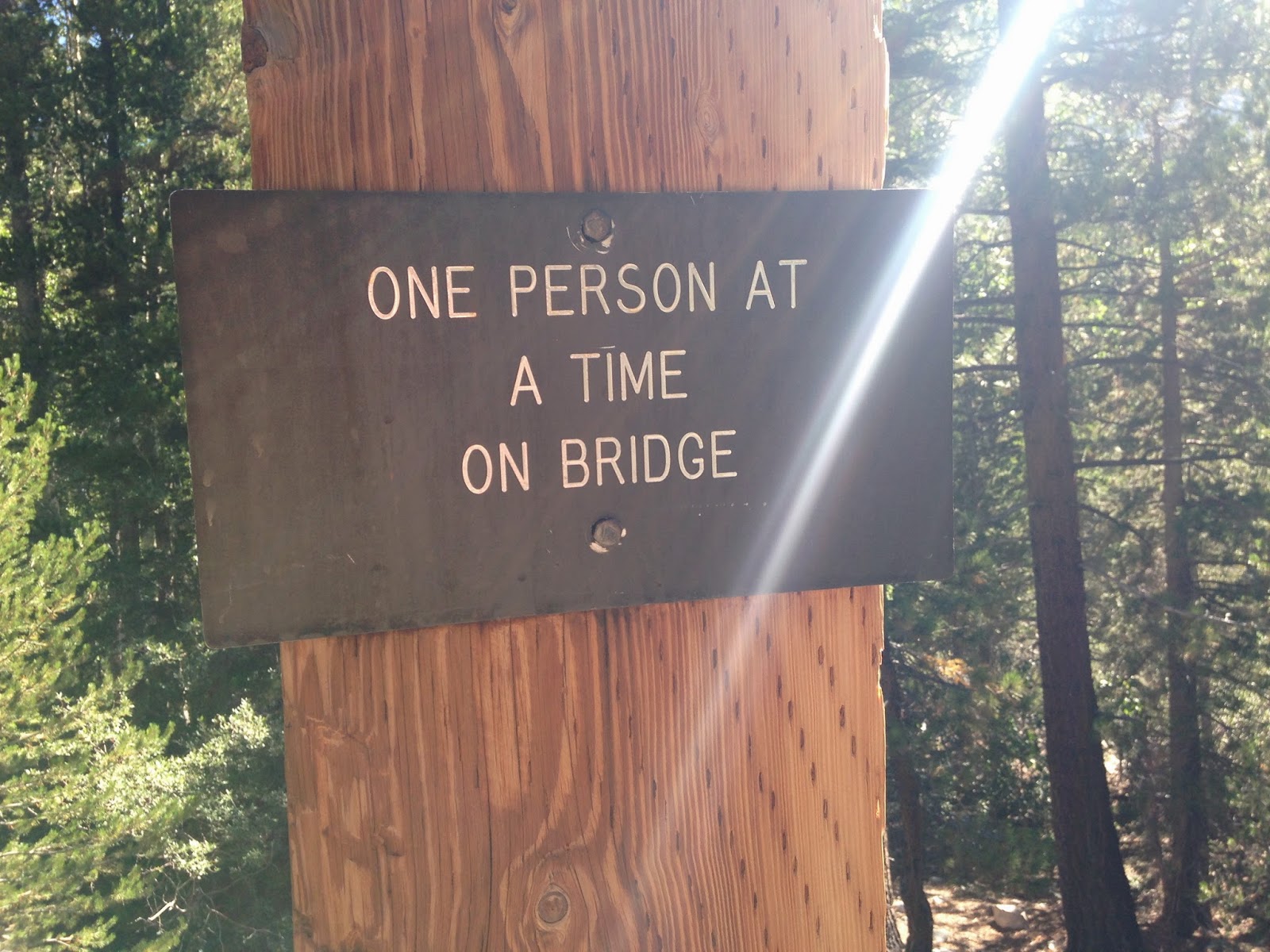 This suspension bridge did NOT look safe.  I sent Sage first, since she was the lightest.  She tackled it cheerfully and with gusto.  She even turned around halfway across and waved at us, which did nothing good for my nerves. 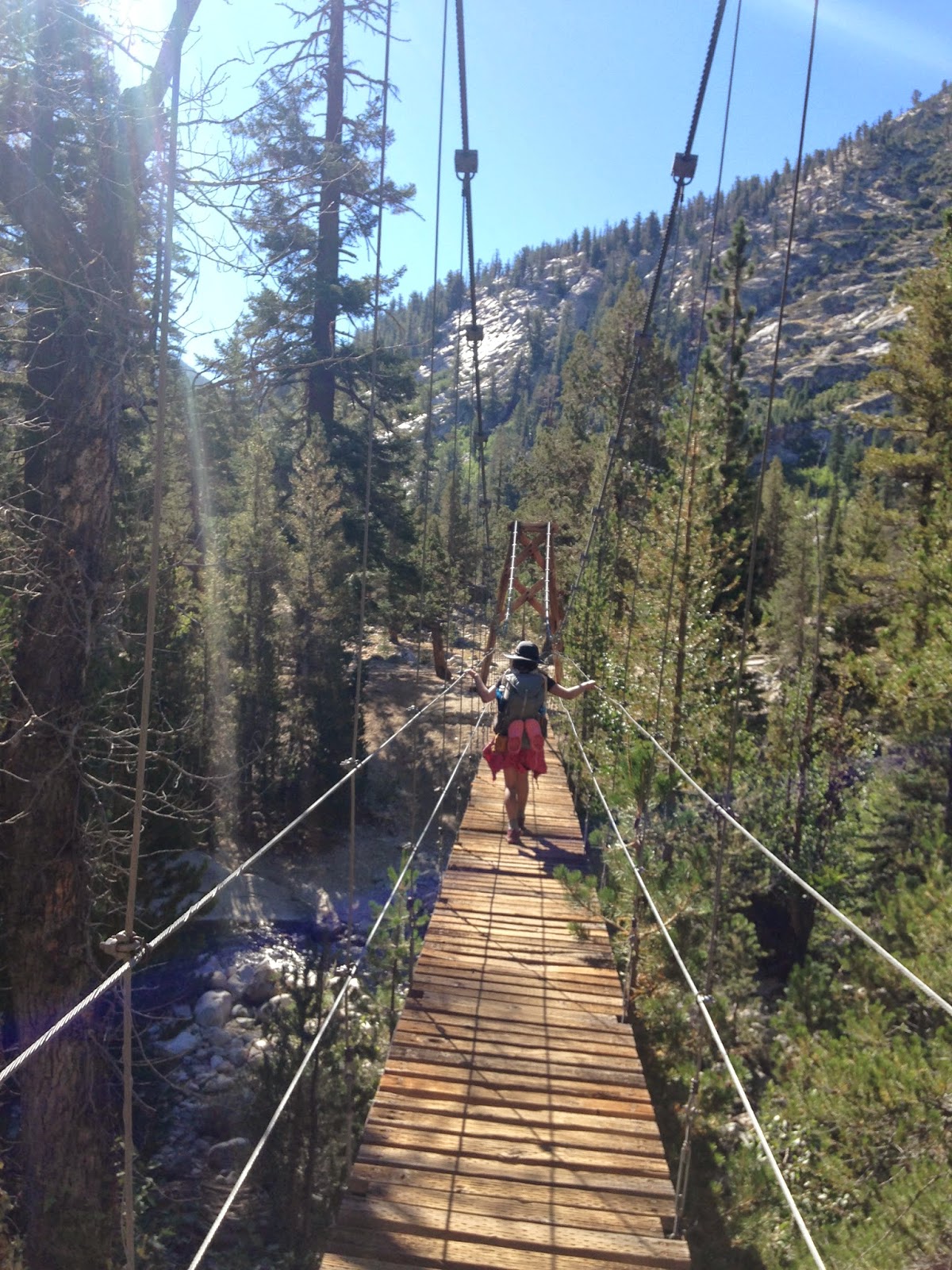 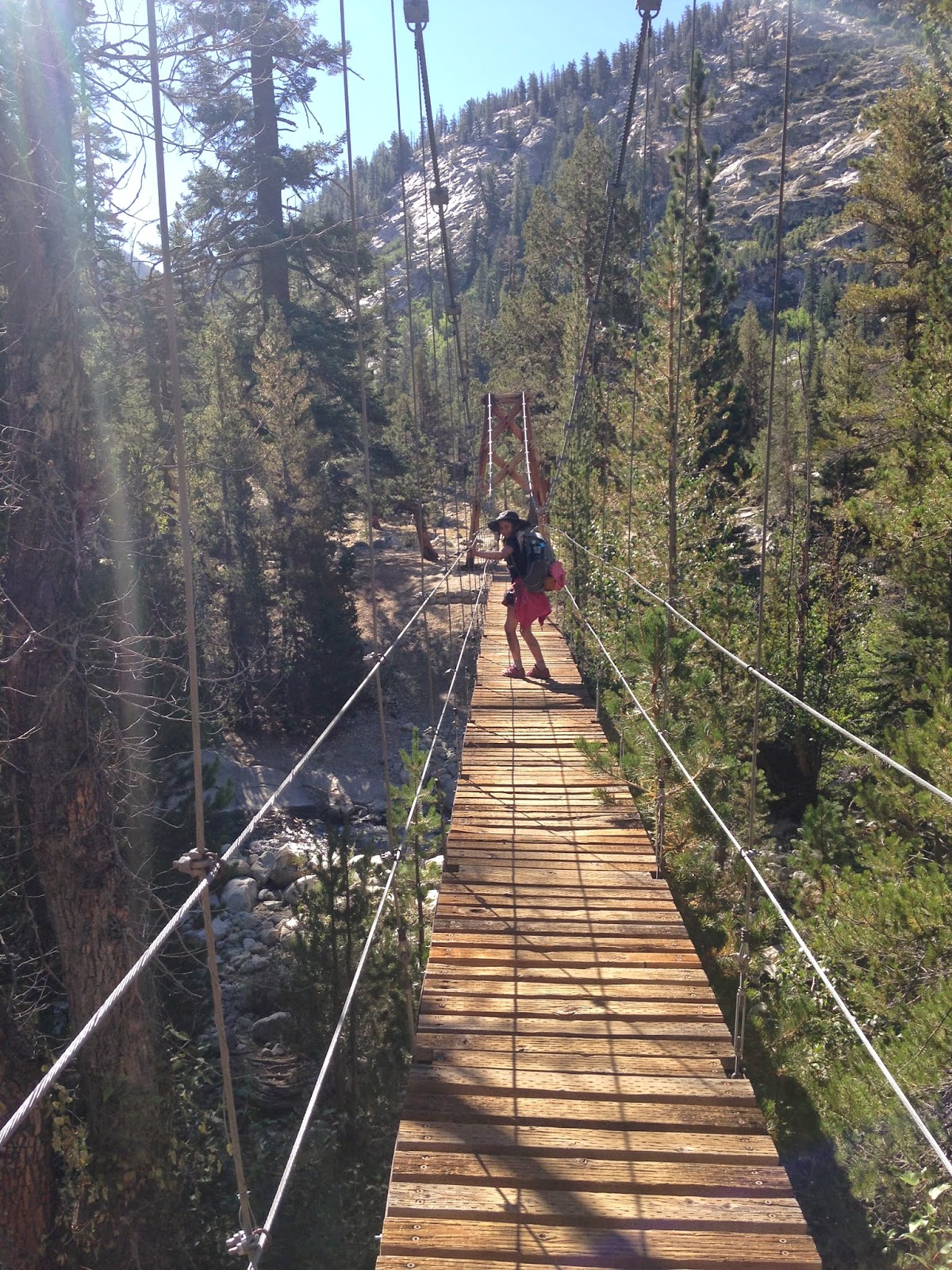 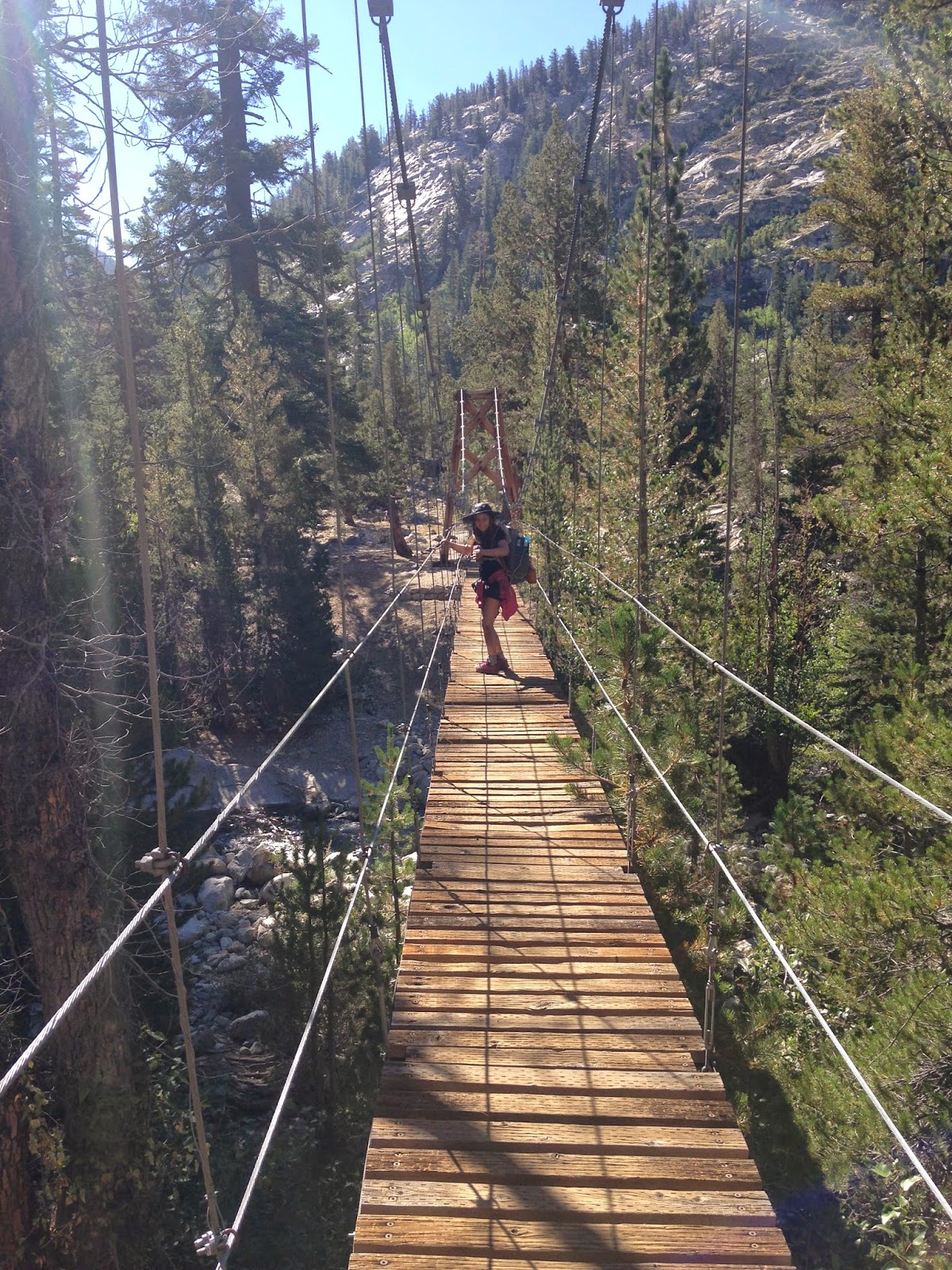 Alex went next.  She too thought the bridge was a blast.


I went last.  That bridge was not fun, not for me, no way!  The whole thing swayed and moved...and some of the boards were missing...and one looked like it had broken when someone had stepped on it.  I had zero confidence about my safety.  It was a million feet straight down to the river from the planks of that wobbly bridge.  Seriously, this was the most frightening part of our entire journey. 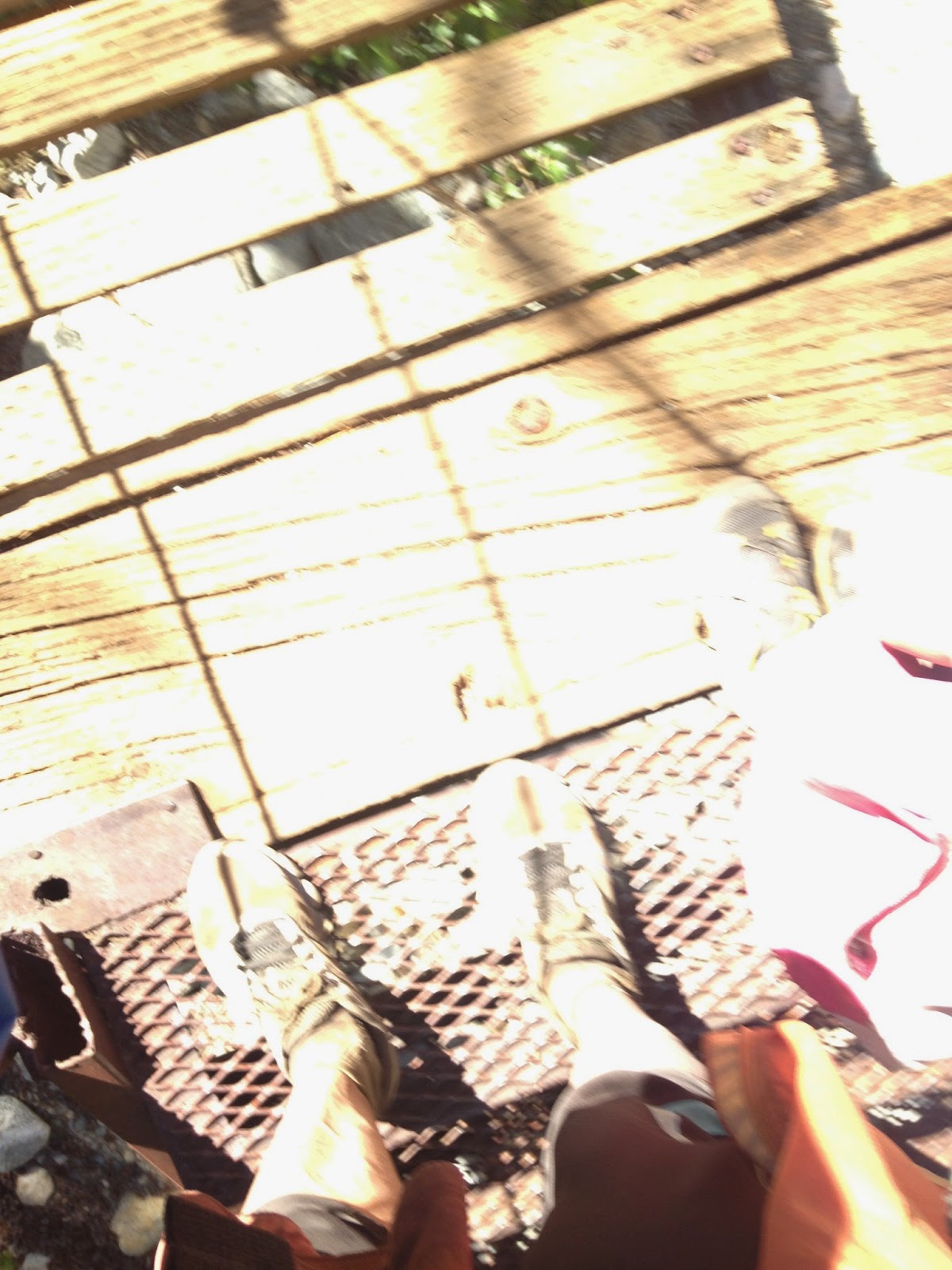 I made it safely to the other side.  We were all happy to be alive. 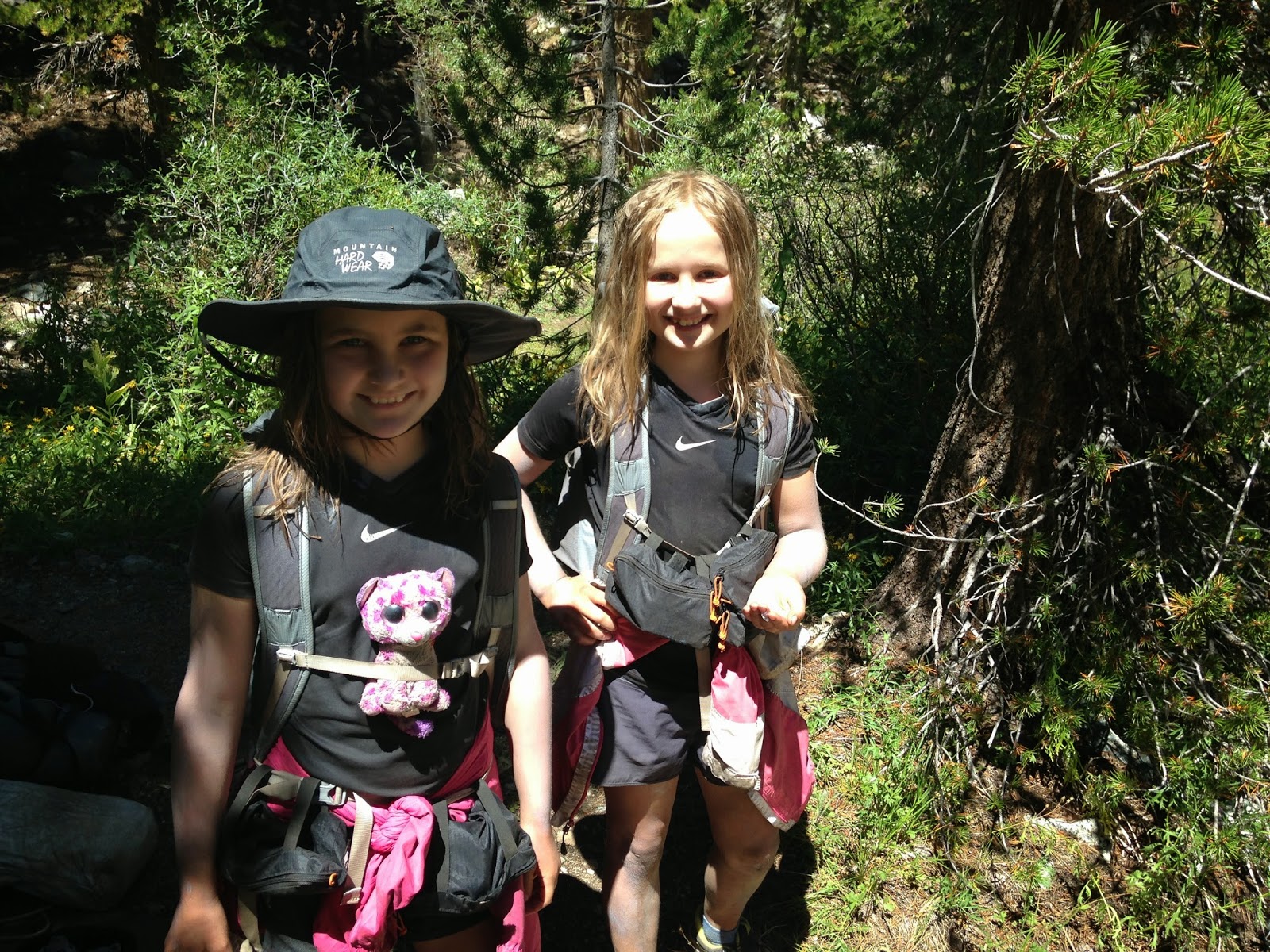 Two kind guys were waiting on the other side of the bridge -- Jim and Bryan.  We had met them before, on Mather Pass.  They were so kind; we had enjoyed our conversation with them up on Mather Pass, and we enjoyed conversation with them now, as we ate and took a break.  Bryan graciously gave me his extra Platypus water bag, after I told him three (!) of our Sawyer Squeeze bags had torn/broken.  (That Platypus bag was robust, and our Sawyer Squeeze filter attached to it perfectly).

Don and Debbie arrived, then we spent the next couple of hours playing leapfrog with them, as we had done the day before.  The day became hot, so every once in a while we'd stick our heads in a stream.  My thoughts kept turning to Sprite and vanilla milkshakes.

The steep switchbacks toward Dollar Lake felt...well...HOT (I thought of little else but Sprite and vanilla milkshakes the entire way up), so we dunked our heads again once we reached the little oasis.  Fin Dome and Painted Lady are in the background... 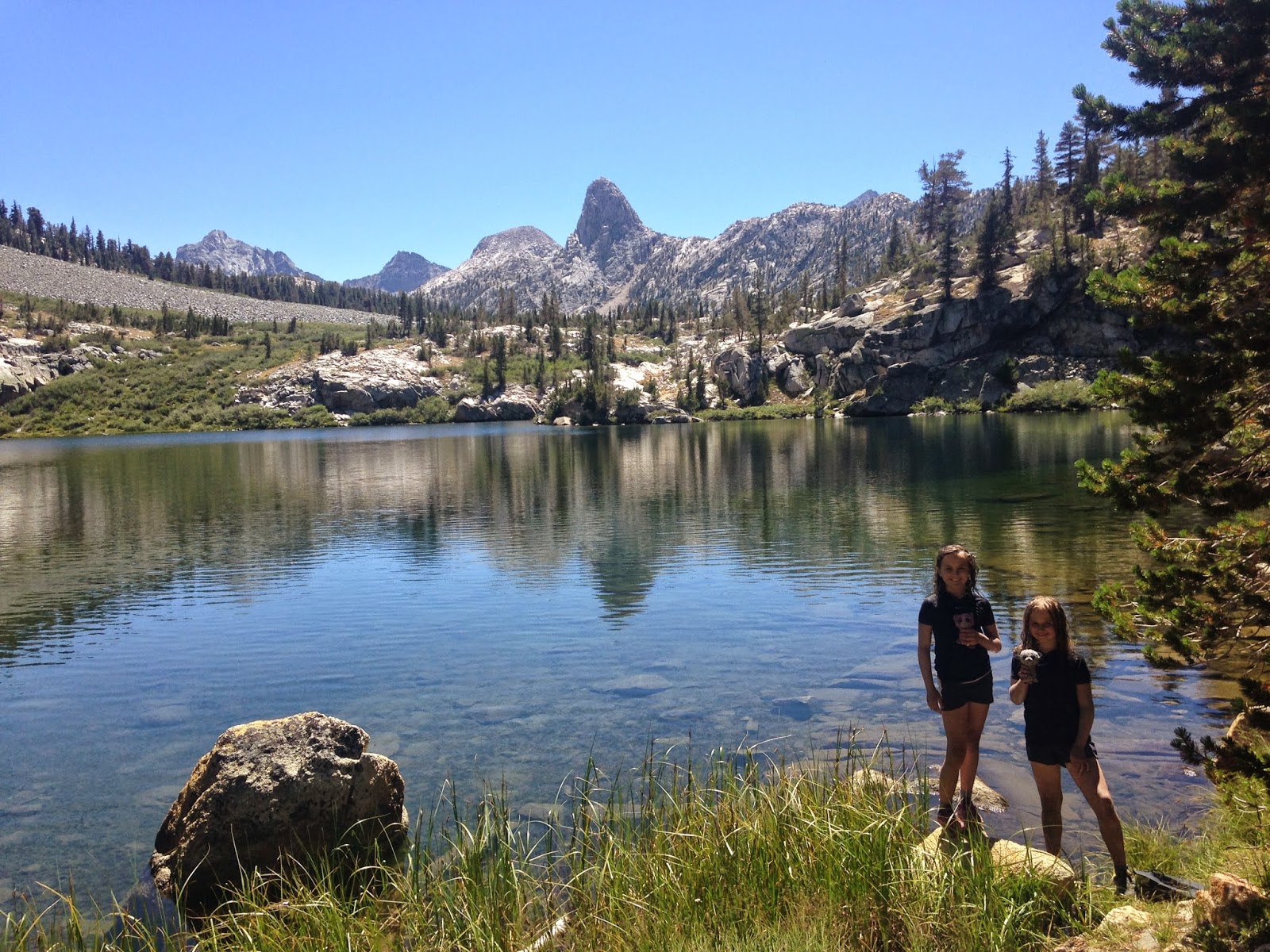 Jim and Bryan were there fishing when we arrived.  They headed onward while we hydrated, then we carried on.

Rae Lakes was the destination...and the three or so miles between Dollar Lake and Rae Lakes felt mellow and easy...and I enjoyed my daydreams of vanilla milkshakes...but when we got to Rae Lakes, we were a little disappointed.  It is beautiful, no doubt, but there are multiple trails in the vicinity, which means many people take two or three day backpacking trips and stop there for the evening.  In other words, it was crowded.  Jim and Bryan were already there, and they showed us a spot where we could camp nearby, but the spot was a bit too small for our liking and we searched the area for a place that would a) fit our three-person tent and b) not infringe upon anyone else's privacy.  It was difficult -- Rae Lakes is Tent City.  We finally found a spot that was kinda-sorta in the middle of a walkway, but it was the best we could do.

Of course, once we had set up and eaten dinner (alas, no Sprite, no vanilla milkshakes), we discovered a huge, gorgeous, secluded spot with its own private access to the lake.  So -- future JMT hikers, take note -- once you come into the main area from the trail, take a right, walk past the bear boxes, and continue until you're almost at the lake.  Then take a right, walk uphill a bit...and voila, your own private, huge camping area.  There must have been over fifty people camping at Rae Lakes that evening, and not one of them discovered that gorgeous spot.

Our next day would bring us over Glen Pass and to Charlotte Lake, where we would stop and wait for our resupply to arrive on the 25th. 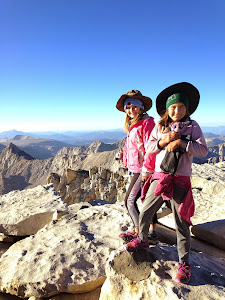 Thanks for helping us raise over $2,200 for Feeding America!